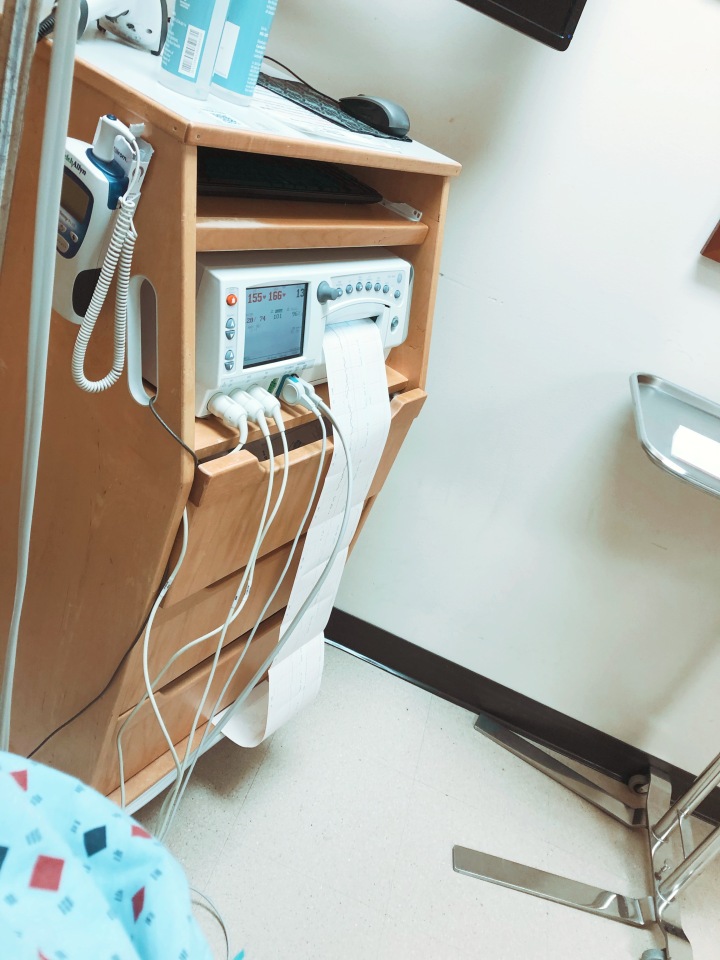 As I headed to my routine 2-week appointment last week, I was in no way prepared for what lie ahead.

No ultrasound that week, which was pretty rare, considering ultrasounds had been routine for most, if not all, my appointments.

Instead, the nurse used the Doppler, which I hate, to test the twin’s heart rates. The first reason I hate these is because seeing my children move on ultrasound not only gives me peace of mind, but also helps me feel close to them. Second, finding two heartbeats, without visually seeing the valves pumping blood, means I wait and wait and wait to hear those little thumps. I hate the waiting.

After finding Twin A’s heart rate, I heard the nurse say, “Well, it’s certainly not like normal. A little faster than expected.” But she proceeded to give excuses to why this could be the case. It didn’t seem totally abnormal to me, but when the professional says it’s not, your mommy-heart tends to worry.

When my doctor came in, I ran this past him, as well as let him know that I was feeling Twin A less than normal that week, even though he’s usually my more active boy.

“Is it less? Or is it just different? You’re at 32 weeks now and they’ve got less room to move. Sometimes it isn’t less moving, but rather different because there’s less space.”

I said, “That makes sense. Sometimes it’s hard to tell who is doing the moving, especially when the movements happen in the middle of them. I feel better!”

“Actually,” he paused. “Why don’t we run some tests. Take yourself over to the hospital and we’ll run a No Stress Test on him. Tell Labor and Delivery that I sent you. I’m sure everything will come back normal and they’ll say, ‘Now why on earth did your doctor send you here.’ But we’ll get peace of mind for you and for me.”

I understood why he was doing it…twin pregnancies are high risk. Decreased fetal movement can actually be an indicator for pre-term labor.

He continued to assure me that things would no doubt be fine and that it’s better to be safe than sorry. I told him I appreciated him, scheduled my next appointment, then made my way to the hospital.

As I got in the car, I called Jimmy to let him know where I was headed, reassuring him, as my doctor had reassured me, that it was no big deal and it would take a couple of hours. Then, I’d come straight home.

I parked in Garage Five and made my way up to the Labor and Delivery ward where I was checked into the OB ER.

The triage center was much smaller than I’d expected: just one big room with three individual patient rooms inside. There was the nurse’s station, two individual bathrooms and lots of equipment.

The OB ER is different from a normal hospital visit. There’s a sense of urgency that hangs in the room. I don’t think any of the nurses speak in full sentences and their movements are in hyper speed.

“Strip down. Change into this gown.”

“Occupied. Use this bathroom.”

By the time I had been there for fifteen minutes, I was wearing a gown, laying on a gurney and everything I’d come in wearing had been packaged in bags.

One nurse was taking elastic bands and belting them around my stomach while the second nurse was asking me questions about my pregnancy, my life and why I was visiting.

Nurse 1: “These bands will monitor the heartbeats of your babies. This third one will measure contractions, if you have any.”

Nurse 2: “You came in for decreased fetal movement, yes?”

Me: “Yeah, my doctor thought it was a good idea to-“

Nurse 1: “Just sit up a little so we can make sure you aren’t twisted.”

Nurse 1: “Twin A’s heart rate looks great, are you feeling him at all?”

Me: “Yes ma’am, once you hooked him up he’s really movi-“

Nurse 2: “And if your boys are born today, would you opt for circumcision?”

Nurse 1: “She just needs to ask these. No worries.”

I’m a very, very laid back person. If I weren’t already in labor, the energy in that room would’ve sent me there. I can only imagine what these triage nurses see in a day, so I understand that they’d be quick to act in order to see as many patients as possible.

Finally, the questioning was over and I was told that I’d be kept on these monitors for a while to monitor the babies. The doctor in charge of high-risk situations would be in shortly to see and assess me. The room was quiet except for the little beeps of their heart rates. I soaked up these sounds and relaxed in the comfort of knowing that my boys were safe.

After about an hour, one of my nurses and the on-call doctor came in, rolling a portable ultrasound machine. They removed the belted monitors to squirt gel on my stomach and have a look at my boys.

“There we go, one baby practicing breathing, that’s good. You see the fluid there? Yes, perfect. Awesome, baby B using their lungs, good.”

As they were discussing, in came the doctor in charge of high-risk pregnancies. She was so pretty, but so, so young.

How much experience could she have? She doesn’t seem that much older than me?

I stifled these judgmental thoughts as she checked all the monitors and peeked in at the ultrasound.

“So, you’re actually having a lot of contractions. They’re pretty consistent, I might add,” said the infant of a doctor. She showed me the lines on the paper as they were being spit out of the machine. “Are you feeling any of these?”

“Uhm yes, but I’ve had contractions before. I just didn’t know they were happening that often.”

I felt silly. And embarrassed. Was I supposed to feel all of these? Should I have come in sooner? What woman doesn’t know she’s contracting? I added I was a first time mom.

“I suggest we go ahead and just check for dilation. Then we’ll call your doctor and get his opinion. Sound okay?”

I shook my head yes as she left the room.

Now nothing in all the world could’ve prepared me for what was to come. When I thought about being checked for dilation, I thought maybe they take a light and look up there. Perhaps they use the tool that opens the vagina during pap smears to take a peek. I didn’t know how far up there the cervix was until someone’s hand was forcing its way up to check.

A river of expletives flowed through my brain.

I hope I’m not saying any of these out loud.  I would literally not wish a cervical check on my worst enemy.

After three different tries (yes, three) from one doctor and one nurse, it was determined that I was 1 to 1 ½ centimeters dilated. A problem.

They left to call my doctor to ascertain his opinion and decide on next steps.

After what seemed like forever, I began to hear bits and pieces of a conversation happening outside my door.

The nurses came in to deliver the news. I’d be admitted to the Labor and Delivery ward overnight for monitoring.

But I already knew that.

As they began to prepare to move me across the hall, I was finally able to call Jimmy and fill him in.

I heard the unease in his voice as I was trying to level out my own trembling words. I again attempted to reassure him that it was no big deal, just some monitoring. I didn’t believe that myself, mostly because I wasn’t sure of that anymore.

Was this preterm labor? Were the boys coming? How would this hospital stay end? I’m not ready yet.

I told him to bring my hospital bag, which really only contained the bare minimum and a hospital bag of his own. No need to rush, everything is fine.

At least, that’s what I was praying for.